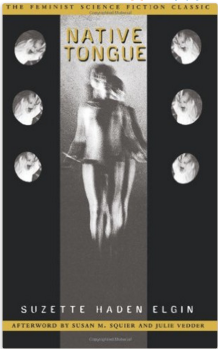 Elgin’s tale of misogyny, language and the search for empowerment by this dystopian society of Native Tongue starts with this:

With one sweeping piece of legislation, women were relegated to the status of “minors” having no legal rights and placed under the “protection” of a male member of her family. In Native Tongue women were valued for their reproductive capabilities and the money they could earn for the men who “protected” them, but otherwise are deemed a nuisance in the otherwise satisfactory life of the men. Because of the similarity in these aspects, it is often compared to Atwood’s A Handmade’s Tale. But Elgin’s work was a far different novel from Atwood’s. Instead of the main character passively accepting her fate, the female protagonists do something, albeit slowly over the course of time. One of my favorite passages from this story is this:

He stopped well away from the house and looked at it, slowly, scrupulously. Not because it was particularly attractive to view. Sheltered in the hillside as it was, with only ground and the earth high over most of that, there wasn’t much of it to see. But what he was looking for was some small difference, something that would catch his attention if he paid attention, something that deviated from the familiar. The women had a tendency to accomplish changes by altering things one infinitesimal fraction at a time, spread over months and months, so that you never saw it happening until suddenly it was just there . . . he well remembered a rock garden that had appeared once on the east slope of the hill, complete with three giant boulders, seemingly sprung instantaneously from the earth. And when he’d demanded to know how it got there— the wide innocent eyes, and the innocent voices. “We had no idea you minded, Thomas!” “Goodness, we’ve been working on it for six months! If you didn’t want us to do it, why didn’t you say something sooner?” Sometimes you went through the fuss and expense of having their projects torn down and disposed of, as a matter of principle; sometimes you let them alone just out of exhaustion.

Elgin’s premise for this novel is that language changes how we perceive our circumstances.In a commentary at the back of the book by Susan Squier and Julie Vedder of Pennsylvania State University notes:

The context of the early 1980s, when Elgin was writing Native Tongue , is important in understanding both the social concerns that motivate the text and its intellectual position. Feminism in the late 1970s and early 1980s, especially academic feminism, was concerned with several sets of questions. Central among these was the question of whether gender is essential or constructed. If gender is essential, biological, and material, then the differences between men and women are set in nature. If gender is constructed, then it has nothing (or little) to do with our bodies and everything to do with social expectations and socialization.

We still haven’t these questions, not satisfactorily, though Wikipedia sums up the current atmosphere
of this question:

The idea that gender difference is socially constructed is a view present in many philosophical and sociological theories about gender. According to this view, society and culture create gender roles, and these roles are prescribed as ideal or appropriate behaviour for a person of that specific gender. Stronger versions argue that the differences in behavior between men and women are entirely social conventions, whereas other versions believe that behaviour is defined by biological universal factors to some extent, but that social conventions also have some effect on gendered behaviour

In the world of Native Tongue gendered roles are legally prescribed with the declaration that a single academic paper proved that women were inferior to men. It was unfair that society should expect women to compete co-equally with men and thus needed the protection of the male half of society. In effect, in two constructions of language, the paper and the amendment, women were consigned to the role of baby-makers and domestic servants of men.

Now it might be easy to dismiss this story as “only science fiction” with feminist (this word bandied about as if it is a mark of dishonor) ideology, but even today we see where language is used, actually twisted, to try to deny women an equal place in society.

IN THE SENATE OF THE UNITED STATES

Received; read twice and referred to the Committee on Commerce,
Science, and Transportation

To authorize the National Science Foundation to support entrepreneurial
programs for women.

Be it enacted by the Senate and House of Representatives of the
United States of America in Congress assembled,

This Act may be cited as the “Promoting Women in Entrepreneurship
Act”.

The Congress finds that–
(1) women make up almost 50 percent of the workforce, but
less than 25 percent of the workforce in science, technology,
engineering, and mathematics (STEM) professions;
(2) women are less likely to focus on the STEM disciplines
in undergraduate and graduate study;
(3) only 26 percent of women who do attain degrees in STEM
fields work in STEM jobs;
(4) there is an increasing demand for individuals with STEM
degrees to extend their focus beyond the laboratory so they can
be leaders in discovery commercialization;
(5) studies have shown that technology and
commercialization ventures are successful when women are in top
management positions; and
(6) the National Science Foundation’s mission includes
supporting women in STEM disciplines.

Sounds wonderful doesn’t it? The government wants to step up and help women level the playing field in science, technology, engineering and mathematics. But like any bill in the House of Representatives it has its opponents. And one of these is the representative from Texas Louie Gomhert. Here is a YouTube video of his remarks:

His objection is that the bill discriminates against “economically disadvantaged little boys.” How does he get there?

The language of the bill specifically mentions women. But we also swap out the word “women” with the word “girl” quite regularly in English. And this is what happens.

When you have “girls” you also have “boys.”

Girls are the polar opposite of boys. Therefore girls must oppose boys.

“Girls” are opposing boys and taking something away from them.

The rhetoric goes from the language of the bill from women given new opportunities as a matter of law, to deny “boys” the same opportunity. Therefore we are discriminating against boys.

And in Gohmert’s minds these boys became disadvantaged little boys at the mercy of a rapacious government that favors girls over boys. Imagine that.

But this is the power of language. Shift a word, spin a phrase and we have an entirely different argument. And the same words apply differently to each gender.

It happens all the time. Here is a quote that explains this exactly:

What about the more profane language? I’ll focus on “bitch.” This word epitomizes the different standards men and women are held up to. To call a woman a bitch implies that she is aggressive, overbearing, unlikeable, and severe. But to call a man a bitch, or to say that he is someone else’s bitch, implies that he is weak and subservient. Thus, our use of this word is immensely problematic because it means the opposite for each gender. It perpetuates the concept that women should not be aggressive and men should not be weak. Men should be the aggressive, dominant ones. Women should be subservient. When a woman is in her subservient role, she is deemed “sweet,” not “weak.” When a man is in his dominant role, he is deemed “confident,” not “aggressive.”

Elgin thought the answer to this type of confusion was that women have their own language that discusses what precisely women think without this type of word distortion.

She says of the book:

Native Tongue was a thought experiment, with a time limit of ten years. My hypothesis was that if I constructed a language designed specifically to provide a more adequate mechanism for expressing women’s perceptions, women would (a) embrace it and begin using it, or (b) embrace the idea but not the language, say “Elgin, you’ve got it all wrong!” and construct some other “women’s language” to replace it.

The ten years went by, and neither of those things happened; Láadan got very little attention, even though SF3 actually published its grammar and dictionary and I published a cassette tape to go with it. Not once did any feminist magazine (or women’s magazine) ask me about the language or write a story about it.

And she also noted:

The Klingon language, which is as “masculine” as you could possibly get, has had a tremendous impact on popular culture — there’s an institute, there’s a journal, there were bestselling grammars and cassettes, et cetera, et cetera; nothing like that happened with Láadan. My hypothesis therefore was proved invalid, and the conclusion I draw from that is that in fact women (by which I mean women who are literate in English, French, German, and Spanish, the languages in which Native Tongue appeared) do not find human languages inadequate for communication.

I think, however, that in this instance Elgin came to the wrong conclusion and might have missed the point she wrote in her own book. In the book Native Tongue when the women’s language was successfully, if secretly, integrated into the lives of women, the women miraculously, despite their unchanged circumstances, became happier. They became outwardly, perfectly submissive to their husbands, perfectly agreeable, and in the end ultimately unsatisfying partners. Because by their very submission made them intolerable the men decided to build them their own houses in which to live.

No. Most women don’t want to live apart from men. But I think we’d very much like to reduce the dissonance from the distortion of the use of language to promote political agendas that give more social power to one gender over the other. We’d like our concerns given serious consideration, rather relegated into the misogynist segment “feminism–danger Will Robinson.” And we’d like to communicate these ideas calmly in the same language men use so they understand us.

Elgin’s book is important for the exploration of the power of language in our lives. It makes us aware of how a shift of few words change us from active partners in society to passive supports to the ambitions of men. And we should be aware of this especially when Gohmert and his ilk use language to try to deny the equality due to us.

Publishing the cover for Native Tongue is used under the Fair Use provision of U.S. Copyright law which allows the use of low resolution images in commentary.