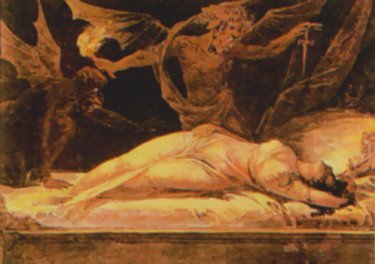 Chuck Wendig gave us ten titles, one thousand words and one week to post on his latest flash fiction challenge. Here’s mine:

“Still, if some are occasionally begotten from demons, it is not from the seed of such demons, nor from their assumed bodies, but from the seed of men, taken for the purpose; as when the demon assumes first the form of a woman, and afterwards of a man; just so they take the seed of other things for other generating purposes.”~Saint Thomas Aquinas

The wind rushed unrelenting over the parched land whirling the topsoil into a stinging whorl of fine sand and I hang back into the door jam. The sound of it was horrible, like the wail of demons joining in an awful chorus. I’ve shivered and gathered my cloak around me.

But I stand in quiet vigil. There was a note on my table by the gray stone fireplace. It said, “I will be there soon. Wait.”

There was no signature on the note. Was I supposed to know who it was from?

I do not know.

The storm is the color of the red sand it possesses. Even the road is obscured but I catch a hint of movement. It coalesces into a form yet undefined and then into the figure of a man.

I cannot see his face, not yet. And there appears to be something slung over his shoulder.

He walks easily through the spit and hiss of this atmospheric apocalypse. I cannot help but to admire the grace with which he treads these final steps.

“Open the door,” he says and I push it away as the wood creaked on its hinges. Fear races through me. Why do I acquiesce to this stranger? I shiver.

I see he is swathed in the same gauzy clothing as me, head to toe, though it is difficult to see where the edges of the cloth end and he begins. A smoky mist curls around him that cannot be from the fireplace as it moves with him.

Carefully he lays the bundle over his shoulder onto the table before the fireplace. I cannot help but note that the lights from the flames do not illuminate him. I watch, holding my breath, as he unwraps his prize.

It is a woman.

Her face is composed in the amnesia of slumber. Her cheeks are rosy and her pink bud lips turn up in a slight smile. The swell and the rise and fall of her breasts are compelling.

“I don’t know what you mean.” My anger rises from the pit of my stomach like a snake about to strike.

“Those damned monks!” he spit. All patience left him. His eyes contained rapacious fire and I was afraid of what he would do.

I back away until my back hits the wall of the single room dwelling. There is nowhere to go. He blocked any exit by the door. There was no other.

Our eyes locked as he appears to struggle with himself.

The woman whimpered, though it was not of fright.

I licked my lips. A frisson of memory taunted me.

“Yes,” he said as an unholy smile lit on his face. “Do you remember now?”

“No,” I whimpered shrinking into the corner of the room. Despite the fire it was cold here. I wanted heat. No, more than that. Flames to cover and consume me. I needed a scorching inferno to warm the dark place in me that had no soul.

He cocked his head. “Do you know where home is?”

He advanced so that his body pressed into mine. The edges of him curled around me in a caress and he lifted my head with his fingers.

The woman groaned. The sound rose and permeated the little room with unfulfilled desire. I cannot help it. My head turned to her and I take a deep breath pulling in the wanton need gathering in her body.

I am pulled toward it, and my hands go to his shoulders to hold me back from going to her. I cannot do this. I should not.

The memory of pain seared me, of hanging from hooks inserted into my wrists, as hooded figures, good men all, attempted to wrest evil from me by laying sharp leather tongs into my naked flesh.

They prayed to God as this did this in long chants of sonorous melody as if their pleas to heaven sanctified the flaying of flesh.

I cowered again and trembled.

He smiled gently and pulled me toward him more tightly. His desire is a swollen brand pressed into my hip. With a look over his shoulder toward the prone woman he said, “this is who we are. Not what those bastards tried to make of you. Look at her. Look!”

She mewled and her breathing became ragged. The sounds called me to answer them.

He pressed his mouth onto mine, forcing his tongue inside. It was hot and filled with taste of acrid smoke. The possession by his raw mouth flared my own need. Memories rushed up, things buried by the sting and cut of the lash. Other women and other men. Humans.

The things I did. The forms I took. I am not one or the other. I am not human. I am not male or female. Hermaphrodite. That is part of what my species is.

The humans do not understand. They think we are unnatural. Evil. If they should happen to capture one of my species they torture us.

“You want me to?” His passion is evident and my need for him wells in my loins.

“We cannot have a child otherwise.” He shifted and melted into a female form to make me understand. There was no need. I understood. This was my mate.

“Take her,” my dearest whispered into my ear.

Photo, Incubus (1870) by unattributed is in the Public Domain as listed by Wikipedia.