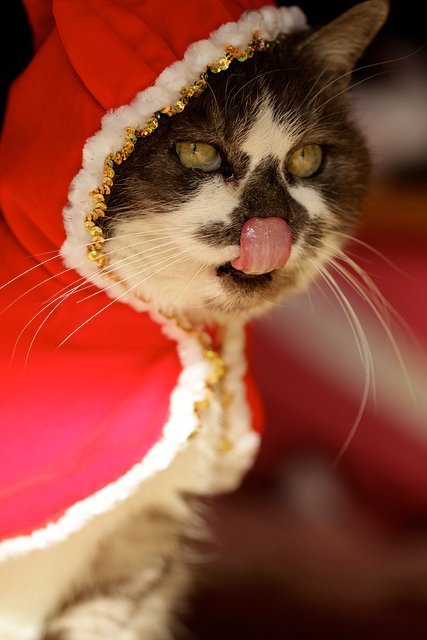 Chuck Wendig’s challenge was to write a piece of holiday horror.

Well, I’ve been busy, really busy, so I’m trotting out a piece I wrote last Christmas for someone’s call for flash submissions. It is the first piece about Merry, who we saw in my piece The Good Girl.

Merry was only eight but she knew injustice when she saw it. She didn’t deserve to be punished. “Mommy!” she sniffed, tears coming to her eyes, “I did not break the Christmas ornaments!”

“You are always such a bad girl. I don’t know how you did it, Merry, but those ornaments were quite rare. They were grandmother’s you know. Go to your room, while I clean up this mess!”

Merry looked at her mother’s angry face and the shattered glass ornaments. She sullenly walked to her room as Tabby, the cat, curled around her legs.

That night, after mother went to bed, Merry dragged her blanket to the living room and hid under it. It didn’t take long.

She peered out from the blanket and saw a nasty looking creature hanging from the Christmas angel. Its naked body was a putrid white. Its face was locked in an evil grimace. It dangled from the angel reaching precipitously to an ornament just out of his reach halfway down the tree.

Merry rushed at the thing, and in its surprise the girl plucked it off. It struggled. She laughed. He bit her, but she didn’t let go. “For that,” she said, “You get this.” She grabbed his head twisting it just as she twisted the heads off her dolls. He stopped struggling. Merry dropped the dead thing to floor. Tabby sniffed at it.

In the morning she heard her mother’s screams upon discovering the creature half eaten by Tabby. Merry smiled.