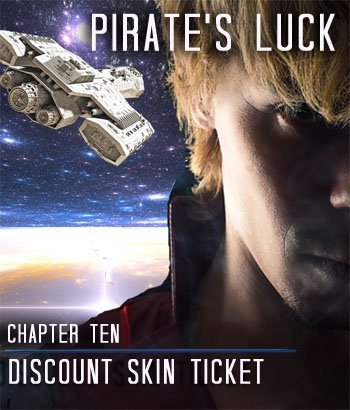 Chuck Wendig’s Flash Fiction challenge was to pick one of ten titles and write a story to it. At first, my inner muse said “write something pretty,” but then that old dog, Arekan whispered, “You’d been looking for a entree into the next chapter of Pirate’s Luck.”  Though it is part of the larger work, I’ve tried to make it as standalone as possible. So, here is the next chapter of Pirate’s Luck. Warning: Adult themes though more a suggestion than action.

The main drag of the spaceport town flashed and jittered with bright lights, blinking signs and sharp sounds that sprang from nowhere. Walking side by side to Arekan, Obon gawked at the women and boys standing or sitting seductively behind their plasglass windows. One young boy licked his lips salaciously as the men of the Rogan walked by.

“So you like boys?” said Egren who stood on Arekan’s left.

Obon shrugged. “I like them all. A touch of skin, whiff of their hair, tasting them.”

The Rogan’s crewmember ran his tongue across his lips and Arekan shivered. Unlike many of his shipmates, Obon was a pirate born into the trade. That he crewed on the shitehole of the Rogan was a testament to his degenerate nature.
(Click here to read more)