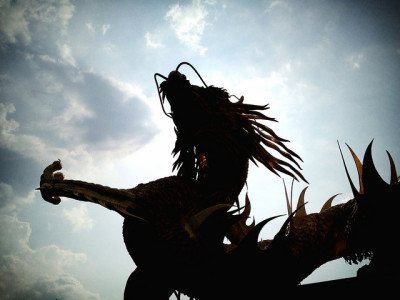 Chuck Wendig’s flash fiction challenge calls for the use of a dragon in the story I have a couple flash stories with dragons, but here is a very short one.

With a powerful down sweep of his wings Langir rose up and off the cliff. He caught a thermal draft, and soared higher toward the orange sun, taking deep breaths to fight off oxygen deprivation. No one else dared to fly so high, and he bugled his triumph as the air drafts pushed against his wings taking him higher.

The sun beat down on his leathery skin, sending a warm rush through his body. It was almost too warm, he was almost too high, but he wanted all of them to see. He wouldn’t take Senlia’s slight laying down.

Below him another dragon struggled to reach him. Senlia. Well, she could just sit on some eggs so all he cared. Not after she chose Genis over him.

“Nothing to talk about,” said Langir, little curls of flame coming from his nostrils.

He turned his body and flipped, beating his wings to hold his place, and stared at the female below.

“I certainly do,” he roared. This time flame erupted from his throat, and she twisted to avoid getting singed.

“You’ve always been a hot head, Langir! Calm down, and come home!”

“So what?” she shouted. “I can’t play chess with you all the time!”

Langir trumpeted his displeasure, and with a sudden wrench of his body, rose higher, much higher than Senlia could ever reach. The young dragon flew until he passed over the ridge that marked the edge of their territory.

Senlia sighed. He was gone.

She returned to the lair. She hung her head. Some days there was no talking to Langir.

Langir’s mother greeted her with a gentle chuff.

“Don’t worry, child. He’ll be back in a couple days.

“But what if he doesn’t? What if he hurts himself, or some human hunter wings him with an arrow, or…”

“Hush, child. One thing I learned about males in my five hundred years is that they always find a way to take care of their own selves. And when they come back, they act like nothing happened at all.

“We always do,” said the elder female. “And they know it too.”

True for dragons and some humans 🙂

Love the personalities that come through and the feeling of flight.

Thanks! And thanks for reading!

Great job illustrating characters in such a short piece.