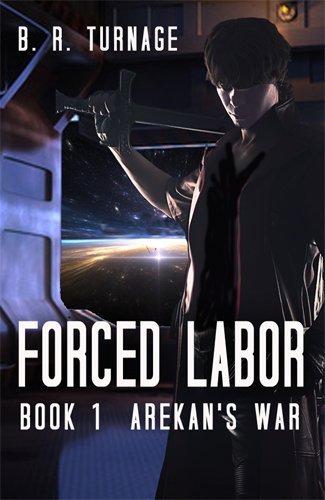 Arekan leads a hardscrabble and solitary life as a hired blade for whatever merchant space vessel that will take him. The problem with twenty-two year old Arekan is that he causes trouble wherever he goes, enough so that he uses variety of aliases. Fired by his last captain, stranded in a foreign nation, he is approached by a member of the outlaw family who once ruled the Kyn Empire. The imperious man offers him employment. The job? Smuggle his son into the Kyn Empire.

Arekan hates the condescending manner of Sinlon Mor’a’stan, and he despises the man’s privileged and haughty son, Santir. Unable to refuse Sinlon’s offer he takes the job. But guarding Santir on the thirty day journey into Kyn on a ship of hardened spacers proves to be a challenge. Between ship politics, pirates, a failed spacewalk and boarding by the Kyn military, Arekan has to use every trick he knows to keep Santir in one piece.

It’s just too bad that Santir chooses to stiff Arekan on his pay. And for that Santir and the Mor’a’stani pay the steepest price of all.