Note: Strange Magic was given to me by the author as an Advance Release Copy in exchange for an honest review. 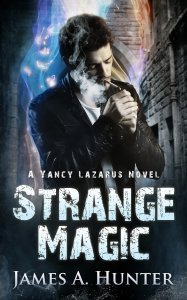 Yancy Lazarus is having a bad day: there’s a bullet lodged in his butt cheek, his face looks like the site of a demolition derby, and he’s been saran-wrapped to a banquet table.

Yancy is a bluesman, a rambler, a gambler, but not much more. Sure, he can do a little magic—maybe even more than just a little magic—but he knows enough to keep his head down and stay clear of freaky-deaky hoodoo like this business in LA. Somehow though, he’s been set up to take a real bad fall—the kind of very permanent fall that leaves a guy with a toe tag—J. A. Hunter

Rival L.A. gangs, a fanatic mage from India looking to trip Armageddon, and a small army of powerful demonic hyena-faced body snatchers collide to take the fun out of Yancy Lazarus’ day. Despite his penchant for smart-assed remarks, cholesterol-laden barbecue, smokes and dive bars, Yancy does have a sincere desire to stay alive. It’s just that some days are harder than others.

The action starts, and doesn’t let up from the first chapter to the last. Hunter tears up the pages with scary and nearly unstoppable demons, gang intrigue, a little backstabbing from supposed friends and [spoiler] an actual backstabbing in the final scene. Here is Hunter’s strength, keeping the action rolling, with plenty of magical fireworks and heart-stopping situations to keep you turning pages to the end.

Hunter has an interesting way of turning phrases, which is part of the fun. Take this line for instance:

“Let’s go for a ride,” he grunted with the linguistic grace of a large boulder.

Other times however, Hunter has an unfortunate tendency to lapse in cliches such as this line:

“Wakey, wakey, eggs and bakey,” I said. “sadly, there’s no coffee and we don’t have time for it-“

Yeah, lines like that I don’t need, but maybe you’ll find them funny in context. Personally I think Hunter tries too hard to make Yancy’s voice cool-hearted and bad-ass when Lazarus’ actions plainly speak for themselves.

We get pulled so quickly from scene to scene that we learn little of Lazarus’ backstory. There is a lovely chapter were he flash backs to his service in Vietnam, which does show his grit, determination and ability to persevere, and a little bit about the wife and children he abandoned. But what we don’t get is how Lazarus “came into,” as he says, his magical powers or how he trained in them. This left me scratching my head, as it seemed an important bit of world building, but no doubt we’ll learn more about this in future installments as this is clearly a series.

An entertaining and fun ride, Strange Magic is worth the price of admission.

Copyrighted Image used by permission of the author.