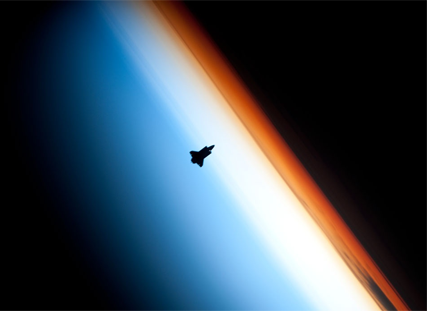 Chuck Wendig’s flash fiction challenge is to incorporate a color into the title of the story. Word count limit, one thousand words. Mine came in at nine hundred eighty-six words.

Ariel took the passenger’s small carry on and stowed it in the overhead compartment. She had to stand on tiptoe to do it, but made it.

“No problem, sir. That’s my job. Now please strap in. We’ll be taking off shortly.”

“I’ve heard take-off is…rough,” he said, his brow furrowed. “If it wasn’t for my grandson’s birthday, I wouldn’t go at all.”

She gave him her best professional smile, all bright and confident. Part of her job was just this, smoothing the passengers’ jittery nerves.

“You are thinking of the early flights, sir, before the technology improved. Now, it’s as smooth as a take-off in a land jet. Excuse me, I’ve some other passengers.” She winked at him. “I’ll be back later and get your drink order.”

For the next fifteen minutes she helped ten other passengers with their luggage and their seats.

“Ariel,” said the captain in her earpiece. “Are the passengers secure?”

“Yes, sir,” she replied. “The last one just strapped in.”

“Do a final check. We’ve just got clearance to move to the runway.”

Ariel moved through the rows, visually inspecting the straps on each passenger as the captain gave his usual spiel through the speakers.

“Welcome the Spaceways Flight 1066, non-stop to Luna colony. I’m your captain, Ronald Gibbs and your attendant is Ariel Robyns. Please turn off all electronic devices and make sure all carry-on luggage is stowed in the overhead compartments to prevent injury. During escape velocity you will feel some added pressure, but this normal. Please be assured that most of the g-forces are handled by our stabilizers, the most efficient of all the spacelines. If you note your attendant at the head of the craft, should a very rare oxygen leak situation occur, oxygen masks will drop down over your seat. Secure the mask by first holding it over your nose, then pull the elastic over your ears to secure it. If a child is traveling with you, put your mask on first. Please keep your seats belts and shoulder straps on until we clear the atmosphere and the artificial gravity engages. After that you’ll be free to move about the cabin. Please remember that is a non-smoking, drug free flight. Contraband will be confiscated and returned to you after we arrive at Luna Colony in approximately nine hours. Thank you for flying with Spaceways.”

Ariel muttered under his breath. He forgot to tell the passengers about the vomit bags—again, she thought as she rolled her eyes.

Ariel smiled. “Of course, that’s all we need.” Or all that would help in case of a disaster, she thought. “Tell you what. I’ll sit next to you as we take off.”

Ariel sat to the older gentleman and strapped in.

“You aren’t nervous?” he said as the shuttle rolled towards the runway.

“Actually, I like take-off. It’s my favorite part of the trip.”

“I guess it’s the excitement of climbing the atmosphere and emerging into the black of space. It’s pretty common for us, the pilots and the attendants. Those that are afraid wash out of training pretty fast. For the rest of us, well, we have a name for it.”

Another passenger calling for her interrupted Ariel.

“Excuse, me,” said Ariel, undoing her strap. She grabbed onto the hand holds as she made her way to an older woman seated with a young girl.

“My granddaughter,” she said. “She’s feeling sick to her stomach.”

“Oh, that’s the excitement. Here, in the front pocket are the vomit bags.” She said this loudly enough so that everyone in the cabin could hear her. As the airship bumped along the runway she took the bag from the pocket of behind the seat and gave it to the woman. “When we escape the atmosphere I’ll bring her some ginger ale. Would you like that, sweetie?”

Ariel made her way back swaying in her movement as the ship sped faster down the runway. She managed to get strapped just as the ship attained take-off speed.

“Here, we go,” she said as the ship lifted from the ground and the engines whined. The older gentleman sucked in a breath as the ship rattled against air turbulence and the g-forces increased.

Ariel keyed on the sound system so she could give her own talk on what was happening. She found that this helped to soothe the passenger’s frazzled nerves.

“To escape the atmosphere we have to reach a velocity of MACH 40, or more commonly, eighteen thousand miles per hour. Old-fashioned rockets would use a mixture of different chemicals that would burn to provide lift. While efficient, they could be dangerous, and early tragedies resulted in the loss of human lives. Now we use ramjet technology, where lasers ignite a succession of different fuels through a specially constructed and shielded engine core. This technology is infinitely safer and cheaper, allowing for commercial spaceflight at an affordable price to our passengers. Right about now you should feel the second ignition that will propel us the next thirty-miles to the upper atmosphere.”

On cue the ship bucked and some passengers made fearful noises.

“It’s all perfectly safe. Now with the second ignition done, I can show you where we are going.” Ariel switched on the movie screen keyed to the forward camera.

On the screen the thinning atmosphere broke through to the black of space, the stars beyond twinkling brighter than could be seen from Earth.

The man next to her let out a low, appreciative whistle.

“It’s so beautiful,” he said with awe.

“Yes,” Ariel said with the same reverence. “It’s why we call take-off ‘tripping the black.’”