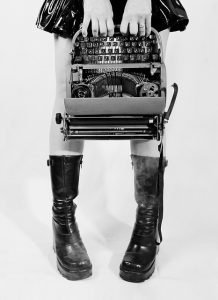 (Beth Turnage Blog) What are the possible factors that lessens the lexical density in writing??

A question in a comment? Yes! I was so tickled that I decided to devote an entire blog post to it. And I won’t just tell you. I’ll show you, and to do so I’ll pick on my of my favorite authors Kevin Hearne whose first thousand words of Shattered:The Iron Druid Chronicles, Book 7 is the perfect case in point.

You: Wait, Beth, you’re not using Kevin’s writing direct from his book, are you? Isn’t that a copyright violation?

Me: Under Fair Use Provision of US copyright law excerpts for the purpose of commentary are perfectly fine especially since I’m using less than 1% of the entire book.

Why did I pick Kevin to pick on? Out of the authors I studied, Kevin, at least for this book, had the lowest lexical density percentage. And what I find fascinating is that Kevin, before he morphed into a full time writer, was a High School English teacher. He taught words to impressionable young minds.

Few things trigger old memories so quickly as authority figures from our youth. I’m not saying those memories are necessarily good ones; they’re simply old and tend to cast us back into roles we thought we grew out of long ago. Sometimes the memories are warm and blanket us like a mother’s love. More often, however, they have the sting of hoarfrost, which bites at first, then numbs and settles in the bones for a deep, extended chill. The ancient man who was pushing himself up into a sitting position in front of me triggered very few memories of the warm sort. Apart from being brilliant and magically gifted, my archdruid had frequently been abusive and had made few friends during his life— a life that, until recently, I thought had ended millennia ago. After he bound me to the earth prior to the Common Era, I’d seen him only a couple more times before we drifted apart, and I’d always assumed he’d died, like almost everyone else I knew from my youth. But for reasons unknown, the Morrigan had frozen him in time in Tír na nÓg, and now he was about to confront the fact of his time travel— with, I might add, flecks of spittle and bacon around the edges of his wrinkled lips.

I hope that if I ever travel two thousand years into the future, there will still be bacon.

His voice, a sort of perpetually phlegmy growl, barked a question at me in Old Irish. He’d have to learn English quickly if he wanted to talk to anyone besides the Tuatha Dé Danann and me. “How long was I on that island, Siodhachan? You still look pretty young. By the looks of ye, it can’t have been more than three or four years.”

Oh, was he in for a surprise. “I will tell you in exchange for something I’d like to know: your name.”

“I’ve never called you anything but Archdruid.”

“Well, it was right that ye should, ye wee shite. But now that you’re grown a bit and a full Druid, I suppose I can tell ye. I’m Eoghan Ó Cinnéide.”

I grinned. “Ha! If you Anglicize that, it’s Owen Kennedy. That will work out just fine. I’ll call Hal and get you some ID with that name.”

“What are ye talking about?”

“That’s a question you’ll be asking a lot. Owen— I hope you don’t mind me calling you that, because I can’t walk around calling you Archdruid— you’ve been on that island for more than two thousand years.”

He scowled. “Don’t be tickling me ass with a feather, now; I’m asking seriously.”
“I’m answering seriously. The Morrigan put you on the slowest of the Time Islands.” Owen studied my face and saw that I was in earnest.

He flailed about for something to hold on to; the number was too huge to register, and the stark fact that he had been uprooted and could never go back to his old earth was a deep, dark well into which he could fall forever. He opened his mouth twice and closed it again after uttering a half-formed vowel. I waited patiently as he worked through it, and finally he latched on to me, having nothing else in front of him. “Well, then, you were on one of those islands too. She must have set us there around the same time.”

“No, I didn’t get to skip all that time in an eyeblink. I lived through it. And I’ve learned a few things you never taught me.” He grunted in disbelief. “Now I know you’re pulling me cock. You’re telling me that you’re more than twothousand years old?” “That’s what I’m telling you. You might as well brace yourself. The world is far bigger and far different than it was when you left it. You’ve never even heard of Jesus Christ or Allah or Buddha or the New World or bloody buffalo wings. It’s going to be one shock after the other.”

Of course he didn’t. He’d never heard of electricity. I’d thrown in a modern Irish word with my Old Irish.

“But your lack of hair is certainly a surprise,” he said, gesturing at my close-cropped skull. It was starting to fill in from when I’d had to shave it all off— a consequence of a recent encounter with some Fae who’d tried to chew off my scalp— but to Owen’s eyes it must look like an unnatural cosmetic decision. “And what in nine worlds happened to the rest of your beard? Ye don’t look like a man. Ye look like a lad who had a rat die on his chin.”

“It works for me,” I said, dismissing it. “But look, Owen, I’m wondering if you can do me a favor.

My archdruid huffed and wiped at his mouth, finally dislodging the bacon bits that had rested there.

“What is it?” I raised my right sleeve over my shoulder, revealing the ravaged tattoo at the top of my biceps. “A manticore destroyed my ability to shape-shift back to human, so I can’t shift to any of my animal forms until it gets fixed. Would you mind touching it up?”

He scowled and flared up. “I fecking taught ye how to tame a manticore, didn’t I? Don’t try to tell me I didn’t! That isn’t my fault.”

“And I remember ye complaining about it too.” He affected a falsetto to mock me. “ ‘When am I ever going to meet a manticore?’ ye said. ‘Why do I have to learn Latin? When are we going to learn about sex rituals?’”

“Ye didn’t have to. There was a year ye couldn’t sneak up on anyone because your knob would peek around the corner first and everyone would say, ‘Here comes Siodhachan!’ and then the rest of ye would follow. Ye remember that?”

Desperate to return the conversation to more recent scars— a much safer topic than my uncomfortable puberty— I said, “The manticore struck first, and taming him was never an option.” “It’s always an option.” “No, it’s not. You weren’t there, and you’ve never had to deal with manticore venom. It requires all of your attention to break it down, trust me. And once I managed to do it, I was so weak that I’d never have been able to survive another dose. I was severely wounded and unable to confront him without leaving myself open to another shot. Any attempt to tame him would have been fatal. I was lucky to get out of there alive.

The first paragraph starts with an impressive 52.53% lexical density, with is IMO the near perfect percentage. Here is the analysis:

And below is the breakdown in words. Lexically dense words are colored green: 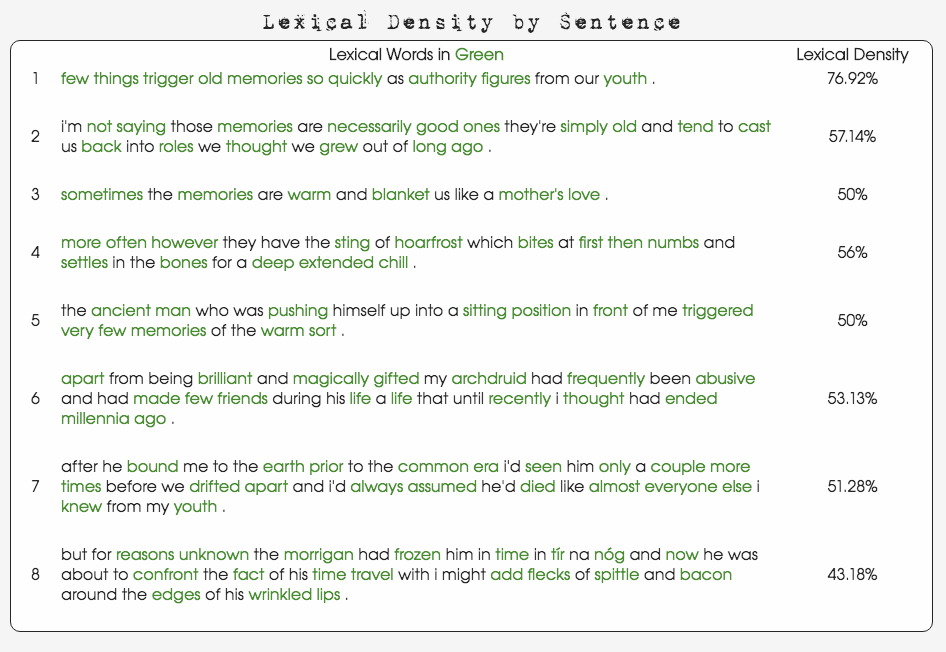 But as we see the rest of the excerpt is dialogue. If you pen your dialogue anywhere near how people speak it will fall the baseline of 48% lexical density.

And here are the individual sentences: 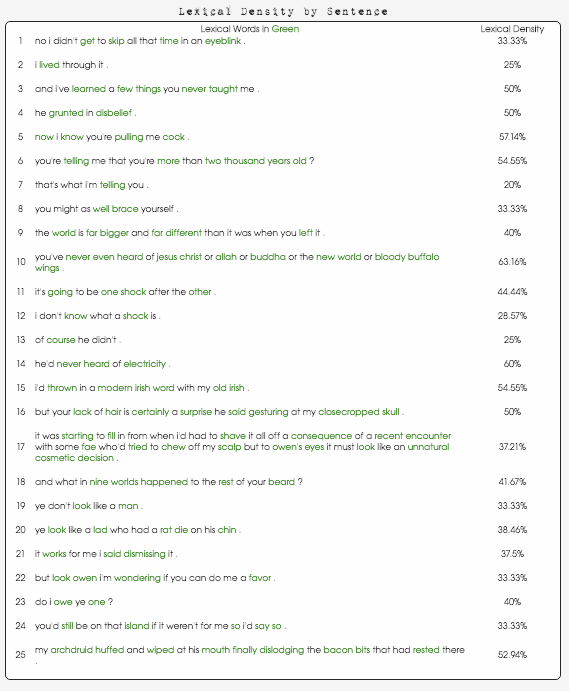 What do we observe between the two samples? Yes, the dialogue has fewer nouns and adjectives, but more importantly double the propositions.

Your lexical density lowers when you use more prepositions,pronouns, and auxiliary verbs than nouns, adjectives, verbs and adverbs.

The problem with dialogue that if you write it as people speak it your prose will be repetitive and boring to the eyes.

Take a look at your text through an editing tool like ProWriting Aide: 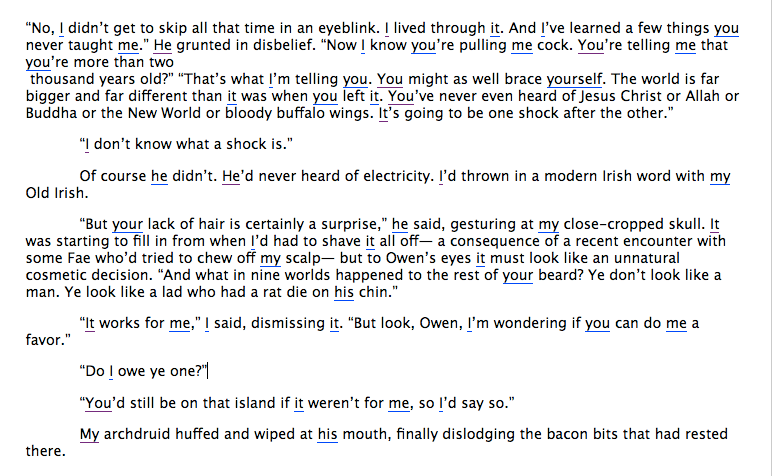 Once you see those underlines you see the need for grooming. ProWriting Aid agrees: 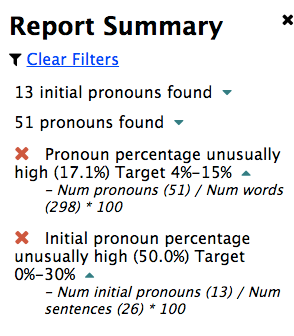 You don’t need to purchase access to ProWriting Aid to help you make changes to improve you lexical density. You can use Analyze My Writing to show you what words you can edit.

Graphics from Analyze My Writing.