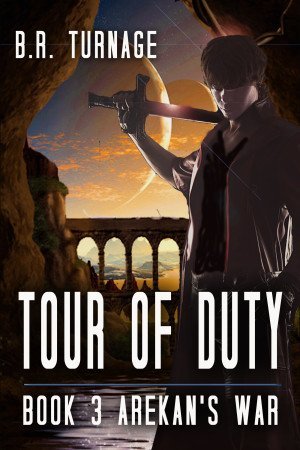 I took the morning to finish up the covers for the Arekan’s War books. Below is the one for book three which is written but needs one more good going over before I release it. But here is the blurb.

Arekan’s first days in the Windshadow Complex are so disastrous that both Santir and Captain Raden Irlu agree its best for everyone if Arekan puts some time and distance between him and the Mor’a’stani lords. Irlu, who quickly became Arekan’s best friend in the complex, persuades Arekan to go with him on the last patrol before the snow flies, a tour of duty that spans part of the vast Windshadow vale. Here Arekan learns about the life of the people of the vale, long thought to be the staunchest supporters of the Mor’a’stani. He finds a people very much split on the whether the Mor’a’stani are their saviors or their enemy. At the same time he takes an interest in the young woman, Katlia, that Raden sees as his, but hasn’t made a formal offer of marriage.

Can their friendship survive Arekan’s meddling in the private life of his best friend?