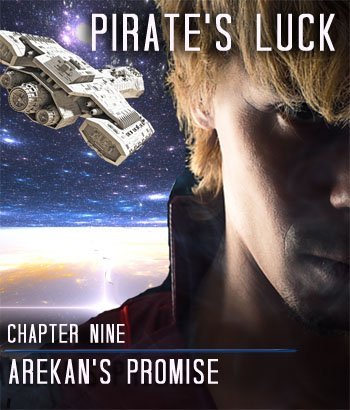 Arekan didn’t want to face the crew or Grokin or Etharin. His stomach roiled queasy cramps, and he had a blazing headache. Arekan stumbled past the entrance to the crews quarters. It was not occupied the this time of day, but anyone of them was likely to pop in so he couldn’t stay there. He grabbed his blanket and the weak excuse for the pillow from his bunk and staggered down the hallway. He tried the hatches of passenger cabins on either side but found them solidly locked. Finally, a hatch creaked open and Arekan slid his body into the compartment.

He hit the light switch at the compartment’s entrance to find a cabin as wide as the crews quarters. Fuzzily Arekan remembered Grokin had mentioned a torn up recreation room. Apparently he found it. Pieces of furniture lay upside down with the fabric on them cut with deep slashes. Some crew member or members had themselves a hell of a time destroying this place. The compartment was grimy, with the deck and walls smeared with what looked like dark brown of dried blood. But Arekan was rapidly getting accustomed to filth, and he was too tired to care.

Arekan overturned a few pieces of the furniture and put together two of the more solid looking couches. Then he settled his blanket on them. He curled up nursing his pounding head and cradling his queasy stomach.

What the hell happened up there? Tinnen’s attitude turned from grudging acceptance to outright horror in a split second. And why was he screaming about his mother? It was true what Arekan said, that the woman that birthed him, at least from his father’s accounts, didn’t want to live with them aboard the generational ship. Arekan thought little on the matter. One, he had no memories of her, and two, no one treated him differently because his father was a single parent.

Personally, Arekan thought he was luckier for not having two parents. He had more freedom than the other kids because his father’s work as ship’s schoolmaster kept him very busy. This allowed Arekan more time to explore the vast ship, and practice on the thing he loved best, his swords lessons.

Arekan dug through his memories to see if his father had mentioned at least one piece of information that could clue him on who she was. Once he asked his father, after he spent the afternoon in the apartments of a schoolmate, whose mother baked cookies for the boys. The fact that the woman took an inordinate amount of time caring for her son fascinated Arekan. Watching the other boy grumble when his mother directed each activity Arekan wondered what was wrong with his friend. It was a paradigm that confounded Arekan.

“Why, father, did the woman tell Joachim every little thing to do?”

“Women do that, son,” said his father distractedly.

“I suppose,” his father said.

“Is that why my mother doesn’t live with us? Because we don’t need her?”

His father looked up from his book with alarm as if Arekan said something shocking. And Arekan saw another thing too. His father’s eyes carried a deep sadness.

“No, Arekan. That is not it at all. I’d be happy if your mother could be here, but she can’t. She took obligations before she met me she must honor. That she gave me you was a great gift for which I’ll be forever grateful.”

“Oh, okay,” said Arekan. He was maybe seven or eight at the time and his attention rapidly got diverted to a war game his friend had lent him. Arekan understood about responsibilities because his father lectured on their importance nearly each day. So in his young mind, a mother he never met was simply doing what duty demanded of her. Plus, he grew uncomfortable seeing his father upset, even briefly, so it was better to stop the conversation.

But now, this woman that birthed him generated a ton of questions needed explanation. Tinnen’s words haunted him. “What in holy hells do we have here? How in the whole of the ‘verse did this happen?”

Why was Tinnen so alarmed? And what did Arekan’s mother have do with it?

But he couldn’t answer these questions, and his brain was too tired to work the problem. Arekan fell into a troubled sleep racked with his bodily pains, and the disorienting sense there was something he should understand but didn’t. The room was colder than the rest of the ship and this caused him to wake, before he drifted, exhausted, into darkness again.

But the next and time he woke to hard muscle leaning against his stomach. His eyes flew open, and he found find Issy coiled up against him.

Arekan froze. His heart beat wildly in his chest at the cold realization that the beast’s head was inches from his own. What the hells was it doing?

The cabin was icy and Arekan shivered. Issy shifted her coils and pressed harder in to his body. Issy, Arekan reasoned, must be using his body heat to keep warm in the cold ship.

An involuntary shiver roused the creature. Issy raised her head and moved it along Arekan’s body toward his. Arekan’s eyes grew wide at her tongue flicked out millimeters from his face. He didn’t dare move. Arekan didn’t know what would cause her to strike, and the last thing he wanted was for the beast to release her venom into him once more.

At the same time he wanted it very much. It would be a relief to forget this horrible place, and these cruel people and their degenerate way of life for a short while. He trembled against this want that threatened to consume him. Resisting the urge to move to draw her strike was the second hardest thing he’d done.

The hatch to the compartment creaked open, and Issy hissed and turned her head to the sound.

Issy hissed and Arekan could swear that he caught anger in her inflection. She slipped off the furniture and under it as far as he could tell.

Arekan hoped Grokin didn’t see him but all the first mate needed to do was take a few steps into the compartment to realize he was here.

“Issy,” said Grokin with a more pleading voice, “I have a nice, juicy rat for you here.”

The thing squeaked the surety of its existence and Arekan visualized the animal wriggling while Grokin held it by its tail.

“Ouch!” Grokin sputtered. “You rat bastard!” Tiny paws pattered across the decking as the vermin made its escape.

Then the creature squealed.

“There you are, Issy,” said Grokin with delight. His boots traveled the decking. “Got ‘ya, you damned beast. Don’t struggle, you bitch. You can’t have that yet, not until you’ve done your duty.”

Several things happened at once.

“What the hells?” growled Grokin as he lurched forward to grab the reptile in mid-flight. Issy flew through the compartment sprouted flaps at her side which she used to help her twist through the air.

A very upset Issy landed on Arekan causing him to spring upright as she slithered back under the couch.

“What the hells are you doing here?” spit Grokin disagreeably.

“Why aren’t you helping Tinnen?”

“He said he had no use for me and kicked me out. I suppose that had more to do with him not wanting to share the bottle he nursed.” Arekan reasoned that on this ship, feeding one’s addictions was a good excuse for any behavior. He didn’t want Tinnen to explain Arekan was the member of the family the Kyn authorities captured and shot on sight. Or that Tinned believed him “twice cursed.” Arekan wanted to discover that information but thought it best to keep Tinnen’s speculations secret until he found out what they meant.

“Gods damn him,” spat Grokin. “Well, I won’t be so eager to help him in the future. But that’s no call for you to hide out. You should have reported to me.”

“Keep up your attitude, and you’ll find that beating I gave you was a lover’s kiss compared to you’ll receive.”

“And keep running your mouth and you’ll find yourself at the other end of my blade.”

“Aye, you are hooked all right. Irritability is just the start of it. How’s the pain, boy?”

“I’m getting by,” said Arekan, though even to his ears his voice wavered.

“Issy, come here, girl. Thad here can use your services.”

“Save it for yourself, you sot. You need it more than me.”

Grokin chuckled. “Oh, I got me own stash, to be sure. But the fresh stuff is the best. Issy!” he called again. He pushed aside a piece of furniture in an effort to spot her.

“She doesn’t like you,” taunted Arekan. “Must be your winning personality.”

“Rather sensitive on the matter of that snake, aren’t you?” said Arekan. He continued his teasing tone. He found he enjoyed annoying Grokin.

“I said shut up,” spit Grokin. He turned suddenly and clocked Arekan’s jaw. Arekan spun and fell into a couch section. Issy flew out from under it, and the first mate dived, hitting the deck heavily. But he clenched the reptile who twisted furiously in his hands. Grokin moved his hands to gain better control of her neck, she bent her head and sunk her fangs into one of them. Grokin cried out and dropped the reptile. But an eerie smile spread over his face and he sat stupidly as the venom took hold.

“Good girl, Issy,” he cooed though the snake had disappeared into a hiding place. Arekan cast his gaze around the compartment but didn’t see her.

“Sot,” said Arekan. He stood having decided he had enough of Grokin’s company. But Grokin’s meaty hand latched onto his ankle. With a yank, Grokin brought Arekan on top of him. Pain from his injuries flew up his spine stun him leaving him unable to crawl off Grokin.

“Look, boy,” leered Grokin clenching his paws around Arekan’s chest. He spoke directly into Arekan’s ear. “You think things can’t get worse for you here? Oh, they can, boy. They can. You’re young and pretty, and only the fear of your sword has held back the men. But even you can’t resist the entire crew when they are looking for fun. Yeah, one holding each limb should do it. And I’ll be the first to take my pleasure on ‘ya. Then I’ll take my turn restraining you while I laugh in your ear.”

“Oh no. I make promises, you sadistic ass. One I will enjoy keeping. Now get your hands off me if you want to keep them. Because right now, it’s you and me, and I’m angry enough to fulfill my promise right now.”

Arekan stood and left the compartment as Grokin laughed behind him. Grokin’s stink clung to him making Arekan want a shower. He went off in search of one.