Today r. r. campbell, the author of the Empathy series, is here to talk about Book 2, Mourning Dove. Mourning Dove is an evocative, sweeping symphony of love, revenge, and desperation in cacophonous times. It is the second installment in r. r. campbell’s epic EMPATHY sci-fi saga.

In the aftermath of the calamitous Human/Etech research study, Chandra and Kyra struggle to reclaim the life they shared in a pre-EMPATHY world, while Ty, armed with knowledge of EMPATHY’s programming language, seeks revenge on the Halmans for the harm that’s befallen his friends.

As a North American Union investigation into the happenings on the compound looms, a grief-stricken Peter works to resurrect the memory of his mother from a harvested nanochip, and Heather scrambles to keep her family–and their company–together. Alistair, having abandoned the family business, plots to save his hide and that of his wife while she strives to stay one step ahead of a husband she has no reason to trust.

Far to the north amid civil unrest, a recently retired Rénald Dupont investigates the disappearance of his friend and former colleague, Meredith, despite grave threats from an increasingly skittish North American Union government.

As old and new foes emerge, spouse is further pit against spouse, brother against sister, and governments against their people. In the end, all must choose between attempts to reclaim the past or surrender to the inevitable, an intractable world of their own creation.

How did you become involved with this book and its themes?

When writing Imminent Dawn—the first book in what’s now become the EMPATHY series—I always had ideas for a number of sequels in mind. Once Imminent Dawn was on contract with NineStar Press, I approached my editor about adjusting the endings for a few characters to better set us up for the rest of the series. My editor indulged me, and Mourning Dove was born.

Where Mourning Dove’s tone and themes are concerned, I’ll direct readers to the last bit of the book’s description, which reads “Mourning Dove is an evocative, sweeping symphony of love, revenge, and desperation in cacophonous times.” In these ways, it serves as the reaction to the bittersweet action of its prequel, Imminent Dawn.

What we see in Mourning Dove are our characters confronting less-imminent but longer-lasting adversity, and how they choose to address it will shape them for the rest of their lives.

What were your goals and intentions in this book, and how well do you feel you achieved them?

The novel’s tagline is “honor the past, embrace the present, seize the future.” These sentiments underlie the crux of the conflict for every perspective character to some extent, which allowed me to really focus on those as the centerpiece of the work thematically.

It’s my aim to demonstrate that the balance certain characters maintain with respect to the past, present, and future will affect the goals they have for themselves and the goals of those nearest them. When the goals in question are centered around matters like adapting to a new normal, seeking revenge or letting all be forgiven, and confronting shifts in one’s self-worth, the ramifications for whether these goals are achieved are vast.

Should readers feel these themes coming across as they read, I hope they reflect more on their own lives. What do they find themselves clinging to overmuch with regards to their past? Are they spending so much time looking toward the future that they miss the present? Are they so wrapped up in only what’s in front of them that they fail to appreciate how far they’ve come, how far they might go?

Admittedly, these are existential questions with answers that will vary from person to person. As is the case in real life, so is the case in Mourning Dove for the ensemble of characters featured in it.

Are there vocabulary words or concepts in your book that may be new to readers? Define some of those.

Yes! Since we’re inhabiting a speculative world, there are plenty of acronyms and other concepts folks might not be familiar with, or that are specific to the world in which the EMPATHY series takes place. Below is a list of some of these terms, along with a brief description of what they mean and why they’re important.

EMPATHY – An acronym for Electronic Mechanism Purposed for the Achievement of a Truly Hybrid Yield, this is the technology at the heart of the entire series. It’s a nanochip that permits those who have it installed in their brains to have a direct connection to the internet.

Cerenet – The cerenet is the internet as seen by those who have EMPATHY installed. It occupies one’s visual field when necessary, but can also work in the background without what we might call a guided user interface today.

(h)ARMONY – This is the programming language on which EMPATHY runs. It’s rumored to be extraordinarily complex in order to stymie attempts at corporate espionage, and only a select number of programmers are actually privy to enough of it to capably write code in it.

Pocketab – These are, simply put, pocket-tablets. They’re like cell phones in that they’re rather prolific personal computing devices, though one of the differences that sets them apart from cell phones in our world is that pocketabs can change size to either fit in one’s pocket or function as a tablet-sized device.

NAU – The North American Union, or the government that unites the United States, Mexico, and Canada under one regime. The NAU is a sprawling, extraordinarily corrupt bureaucracy with some judicial powers granted to its congress. In other words, a selection of senators could, for example, band together to launch an investigation into, say, wrongdoing on the EMPATHY research compound and then hold those responsible for that malfeasance criminally liable…

There are plenty more particulars to the EMPATHY universe; I could go on for some time. I have a great deal of fun with the acronyms sprinkled throughout—including some Easter eggs that adept readers might discover—and I’m so looking forward to the day someone shoots me an email to say, “Ha! I see what you did there.” 

Are there misconceptions that people have about your book? If so, explain.

There have been some divergent opinions regarding the primary cast of characters. For some, a particular character might be a favorite, but for others, they’re a sworn enemy. This is actually some of the best feedback I’ve received on the book, even if it isn’t what many authors might consider positive. Why you ask?

One of my goals in writing a multi-perspective narrative was to present morally-gray characters who find themselves in no-win situations more often than not. Or, if they do have a situation in which there appears to be a simple, easy way out, I make it such that they’re tempted to (and often do) choose the option that they’ll go on to regret. In this way, I also intend to demonstrate how easy it can be for a single decision to have huge implications for one’s life.

That readers seem to react differently to how characters behave at these decision points is, to me, commentary on the nature of forgiveness. How forgiving are we willing to be of someone who is okay harming others if their heart is in the right place when doing so? What about characters who choose ignorance if it will fuel their own self-preservation? At what point is it too late to be redeemed, if at all?

That there’s some debate among readers about these topics is wonderful, even if others might choose to view it as an indication of something faulty in the narrative.

There have also been a handful of comments about loose threads at the end of book one, which surprised me a bit. I’m confident the book’s primary conflict is resolved by the end of the series’ first installment, and many of the threads that are unresolved are left open in order to provide a runway down which the events of book two, Mourning Dove, can take off. It’s my hope readers will recognize this and embrace it as the series advances, since if everything were to wrap up tidily at the end of each installment, there’d be little motivation for readers to continue through the entirety of what will likely be a seven-book series.

Lastly, I want to encourage folks who read Imminent Dawn to keep their eyes peeled. Book two has a number of small details stitched in to give readers a taste of what might come, as well as to suggest how matters once thought unresolved might resolve themselves in the near or long-term.

And, of course, thank you Angelica for hosting me on your blog! Thanks to readers who have picked up their copies of Imminent Dawn and Mourning Dove already, too. Your support means a great deal, and I’d love to hear from you.

If you haven’t yet grabbed a copy of either book, they can be found at the links below. And don’t forget to add them on Goodreads! 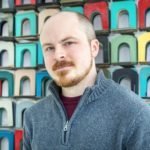 r. r. campbell is an author, editor, and the founder of the Writescast Network, a podcast collective for writers, by writers. His published novels include Accounting for It All and Imminent Dawn, which debuted as the number one new release in LGBT science fiction on Amazon. Its sequel, Mourning Dove, is now available with most major retailers.

r. r. lives in Stoughton, Wisconsin with his wife, Lacey, and their cats, Hashtag and Rhaegar.

Note: All images used with the author’s permission