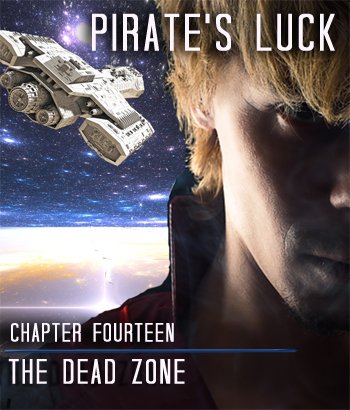 Arekan cursed Etharin while he crawled in the ventilation shafts of The Rogan, a spaceship thirty-years too old, and sixty-years behind in repairs and upgrades. The tub was not fit to sit in, let alone travel the black depths of space. In his short life, nineteen-year-old Arekan Mor’a’stan never thought he’d land on a pirate ship, or as the captain called it, a salvage vessel. Arekan also never imagined he would need to use an alias, or sell his sword skills honed since he could walk to land a berth on the decrepit scow.

Worse yet, the Kyn Imperial Navy had boarded the barge which put Arekan’s life in danger. Arekan continued to spit venomous words born from the roiling bile in his gut. Etharin illegally recharged ramjet batteries and stored them in the engine room, the energy signatures of which must have attracted the Impies attention. Arekan could not afford this. The Impies would find him on board. As a member of an outlawed Kyn family, the Imperial Navy would automatically kill Arekan as soon as a DNA scan confirmed his identity.

From his perch in the ventilator grate that overlooked the cargo hold, Arekan watched the Impies march onto the metal deck. Their heavy boots rang through the large compartment. A man walked up the line with the swagger of one in command. Arekan couldn’t see because of the angle and the grating the man’s rank on the collar of his dark blue uniform.

“Who’s in charge of this tub!” called the officer.

“I’s is,” said Etharin, who stepped forward from the ragged line of crew. This surprised Arekan who’d only seen the enigmatic ship’s master twice. Once when the captain hired him, and earlier today when he took the new crew member Rastan, AKA Peppen, to the bridge to meet Etharin. Arekan counted the number of heads and found one missing, besides him. He peered through the grate again to find First Mate Grokin, Engineer Tinnen, General Hands Obon and Egrin, the new crewmate, Peppen, and Cook standing in line. They were a foul-looking lot, and they had nasty habits. Arekan also noted Cripin, the navigator, was missing.

Arekan couldn’t worry about Cripin. Job one was to solve the problem of the contraband ramjet batteries. There were a dozen of them in the engine room. They were dangerously close to the null space generator which was the piece of machinery that made space travel to distant stars possible. But in the batteries in their present state were unstable and moving them could blow up the ship.