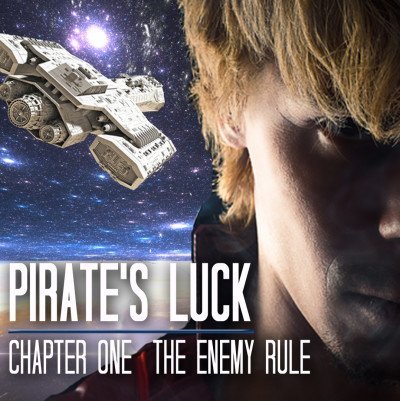 He sat in a corner table in the filthy, and loud spaceport bar. Just nineteen, he was too young to be here with a beer at hand and expected to be turned out any second. But he waited for someone, and he had to make this meeting. Because of his last encounter with them, he was on the run from the Imperial Guard. Staying here at N’sen, the crossroads of three nations, the League, Kyn and Oshija, was no longer an option. To get clear, he had to find a ship fast to take him on as crew.

The light over his head lit his rust-colored beer highlighting the bubbles that rose to the surface. He had spent his last coin to purchase the beer and wasn’t drinking any of it. He thought it would make him look like he was grown up and belonged in this rough company. Truth was, he hated the taste of beer. And he didn’t in the least bit feel like an adult. That was his father’s role, and now he was gone.

“Thad, Thad Grane.” Arekan almost didn’t hear his alias in the din of the conversations that consumed the bar. He looked up and caught the eye of the man he came to meet. He was big, wide, and didn’t know the meaning of personal hygiene. The man moved to his table and sat without invitation.

“Etharin, master of the Rogan.” He studied Arekan’s face. “You don’t look like no swordsman,” the man opined. “Nor no spacer.”

Arekan sized him up and concluded that this man wouldn’t listen to denials.

“Suit yourself, “ said Arekan as he rose.

The man’s hand snaked to grab his arm. Arekan, sucking back a rush of fear, gave him a cold look.

“But, I heard tell of that fight over at Talman’s Pub. They still talk about how you sliced up Kelman. Aye, that’s a tale I’d hear again.”

Kelman was a loudmouth Oshijan who thought he knew a weak fighter when he saw one. He was wrong.

“I ain’t no storyteller,” said Arekan. “And if my resume isn’t impressive enough for you, I’ll be on my way. There’s some ship that will take me.”

“Hells, aren’t you a twitchy one?” said the man. “Kelman ain’t been bested in a barroom brawl ever, Thad. Or whatever your real name is. You’ve had military training for sure, though you be too young for it. What army did you train for? What got you kicked out?”

“Tell me,” persisted the captain. “And I’ll think hard about taking ye on for crew.”

Arekan couldn’t possibly tell him who he was, or how or why he got the training he did. If word of that got out, he’d wouldn’t just be arrested. Imperial Troops would execute him without trial. Instead, with his free hand, and his heart thumping, he drew his sword. He whipped it to the man’s neck.

“Even if you did hire me, who I am is none of your business. You hire my blade to help protect your ship, or you don’t hire me at all. Now let go of my arm, or I’ll slice off your hand.”

Etharin released Arekan’s arm and laughed. “You got the right attitude, that’s for sure. Sure sounds like you got my first rule of business down.”

“And what rule is that?” said Arekan.

“It’s called The Enemy Rule. In this business, everyone is an enemy unless proved otherwise. I have no use for enemies, so either I befriend them or kill them. Which one would you be?”

The man’s eyes glittered with a predatory gleam. The young man wondered how many of this captain’s crew waited outside of the bar to administer their master’s judgment of Arekan.

The man guffawed. It was a sharp and cruel noise, and Arekan knew no good things come with a man with a laugh like that. “Good choice, Thad. Now, let’s run along. We’ve got a ship to get out of port.”

Arekan doubted going with this man was a good choice. But was the only one he had.

The first thing that hit Arekan was the stench. When he followed Etharin up the gangplank of a small cargo hauler, he was unprepared for the stench of sweat, greasy food and other scents of human existence. The ship on which he was raised was kept fastidiously clean. Any ship his father and he were on in the past two years was nearly the same.

He glanced around the cavernous space which easily took half of the ship’s bulk. The hold was dark, so he could not make out the ceiling. But from what he could see of the bulkhead it was triple lined. This he knew from his lessons on his home ship about ship’s operations. The outer hull provided the first line of defense against the deadly elements of space. The middle hull was the secondary defense. The inner hull was structural being the first hull in construction. The beams crisscrossed in hex design and plating fixed to the inside of the hexes. Hand holds stuck out from the plating every three feet on all walls and all directions but the deck in case the artificial gravity failed.

Crates were stacked throughout and strapped into the deck with thick bands that clicked into the decking which were peppered with holes to take the hooks at the end of the bands.

“This is the cargo hold, boy.”

Arekan didn’t say anything. Etharin spun around and clocked him in the jaw. Arekan staggered back a couple of paces surprised a man of his size could move so quickly. His eyes burned with anger as he raised his hand to his jaw.

Etharin walked over to a massive set man securing a stack of crates. While not as portly as the ship’s captain, Grokin had girth on him that matched his overly broad shoulders. His head was shaved, and both ears sported multiple small hoops in his ears. Black tattoos filled his upper shoulders and his arms.

“Grokin, this is Thad Grane. Thad, this is the first mate. Gettin’ an order from him as the same as getting it from me.”

“You questioning me, Grokin?” snarled Etharin. His voice was low and filled with warning.

“No, sir,” said the first mate in a raspy voice.

“Show him around. The ship is going to launch in twenty.”

Etharin moved his hulking bulk out of the cargo hold, and the hatch shut with a clang behind him.

“You any good with that thing?”

“You want to find out?” Arekan said with as much menace as he could muster.

Grokin grunted. “Do you know anything besides how to handle a blade?”

“I can speak two other languages—”

“I mean anything of use,” said Grokin nastily.

“Apparently not,” snapped back Arekan.

Grokin chuckled. “Ever worked a ship before?”

“I lived shipboard all my life.”

If Arekan thought Grokin couldn’t be more disagreeable, he was wrong. The first mate rushed at Arekan and slammed him into the bulkhead next to the maw of the open cargo bay door. All air left Arekan’s lungs, and fire shot up his spine. Grokin pressed his meaty arm against his windpipe.

Arekan had enough. This moke manhandling him worked his last nerve. To get some leverage he grabbed a handhold on either side and jerked both his knees up and into Grokin’s sensitive man parts. At least he hoped that Grokin had man parts. The past year with his father was very instructive in learning the different things humans did to themselves and each other. The first time he met a eunuch shocked the hells out of him.

Grokin howled and fell off Arekan clutching himself. He stood staring at Arekan full of piss and fire as if was debating whether to kill him now or later.

“Grokin!” snapped the voice of the captain in the hold. “What the hell’s is going on? Why isn’t that hatch secure! We’ve got lift-off clearance, and I want to get off this damned rock before the impies figure out they’d like to keep us here longer.”

At this moment Arekan’s instinct was to grab his duffle and hop of this hell of a ship. But the whine of lift-off sent a high keening sound through the ship. A forward motion caught Arekan and Grokin off guard, and they swayed to keep their balance. Arekan hurried to the control panels of the hatch as the ship lurched forward and punched one of the two buttons, hoping he’d picked the right one.

Grokin swore behind him, and Arekan hurriedly punched the second one. The hatch began its descent. Arekan clutched a handhold on the bulkhead to steady himself, while Grokin wrapped his hand around one of the straps securing cargo. Arekan watched the hatch ground achingly slow to the hatch seal. He swallowed hard as the ship gathered speed and he wondered if it would close before disaster hit. Arekan easily imagined the two of them sucked out of the ship as they climbed the atmosphere. However, most likely they’d pass out before they did.

Arekan did not relish the thought of being unconscious on this ship.

The vessel rattled hard now down the runway and then lifted throwing Arekan hard against the bulkhead. He felt lightheaded, and he realized the oxygen in the cargo hold rushed out to the moon’s atmosphere.

Ahead of him Grokin, clutching the strap with both hands mouthed soundless curses. But the hatch finally met the seals with a loud hiss. The ship pitched steeply pressing Arekan painfully into the bulkhead. His heart pounded, and his blood roared in his ears as the walls of the vessel clutched him in a death grip. Breathing became a study in pain. He couldn’t move a single muscle during this hell ride, and that terrified him.

“Hang on, hang on,” he chanted to himself. He needed to be conscious when the ship leveled out. Arekan had no idea what insane thing Grokin would do to him next. He concentrated on keeping his breathing slow, deep and even as the G forces held him in its coffin’s grasp.

Grokin was now collapsed on the deck sliding toward Arekan faring no better than him. He was nearly touching Arekan’s legs now, and his face turned up to him in a look with so much hate that Arekan would have shivered if he could.

With a lurch, the ship leveled, and Arekan fell across the prone body of the enraged first mate.

“Get off me, wog,” growled Grokin, pushing at Arekan with his hands to move Arekan.

“Give me a freakin’ minute,” spit Arekan. He rolled gracelessly off Grokin and sprang to his feet ready to counter whatever abuse the large man had to offer.

Grokin rose to his feet, glaring at Arekan. Their eyes were locked in hard stares, and Arekan did not know what the man was going to do.

The voice of the captain over the intercom broke the scene.

“That’s what you mokes get for screwing around at liftoff. When I say twenty, I mean twenty. Next time tend to business, not playtime. You got that?”

Grokin shook his head and cursed under his breath.

“Etharin did that on purpose?” Arekan could not believe it.

“That’s “captain” to you, wog. And yeah. Though he could have done worse.”

“Yeah, one time he had us throw a moke out clutching only a line while during lift-off.”

“Same reason as he does everything—to prove his point.”

The intercom broke in again with the clearly annoyed voice of the captain.